December is at your doorstep, meaning the new year is practically around the corner. As an investor, this could mean that you're probably going to have time to look at your investment portfolio to decide on a few winners to keep in your team, and some losers you may have to let go. What you may or may not know is that this action isn't entirely unique to you. You may unknowingly be one player in a bigger market anomaly called the January Effect.

What is the January Effect?

The theory goes that January is the month when underperformers in the previous quarter shine. This means that the stocks which underwhelmed and may have been sold off in the previous month (the previous American quarter), December, suddenly flourish and rake in returns for investors by January.

There are two part-theories which support the occurrence of this event in the markets go a little something like this:

Investors have extra time and money in the month of December to review their holdings and decide whether they have enough patience for an underwhelming stock, or have had too much patience. With the December holidays and the year-end bonuses that may come with the festivities, investors tend to make changes to their portfolios around this time of year.

The other part is that in December, investors run from capital gains taxes by selling stocks already at a loss, to offset tax liability and balance the balance sheet, in what is called Tax-Loss Harvesting. By January other investors would have noted the dumped stocks, and buy them at a much cheaper price. The limitations to this is that the South African tax-year and the American one do not run concurrently, so this widespread sell-off would theoretically be unrealistic.

Ultimately, this effect and anomaly highlights the very psychological side of the markets and investing. While the tax reason seems quite reasonable for our friends across the pond who observe a different tax year, the January effect has occurred more consistently in SA markets than in US markets of late. 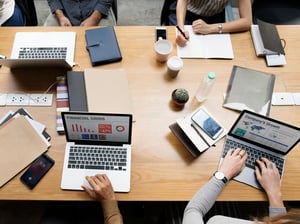 While it would make more logical sense to see a rally in local markets during the month of Dezemba, some analysts have found that January remains the month of rebounds. January is also the month of 'New Year, New Me, New Money' in some spaces. Investors may use the extra time and money afforded to them as a license to re-jig their long-term financial goals with shinier stocks.

Anomalies are not a given

Investors must be careful to take anomalies as gospel. They may or may not occur, and are hard to use as a solid investment strategy that is guaranteed to reap rewards. However, they do make the stock markets interesting to observe for data nerds and technical analysts like my friend Barry 'The Beef' who revels in finding the dips and curves in the markets and on stocks. Make sure to check out his research notes for more interesting insights and stocks.

Check out the January Effect and other market anomalies, courtesy of Investopedia.