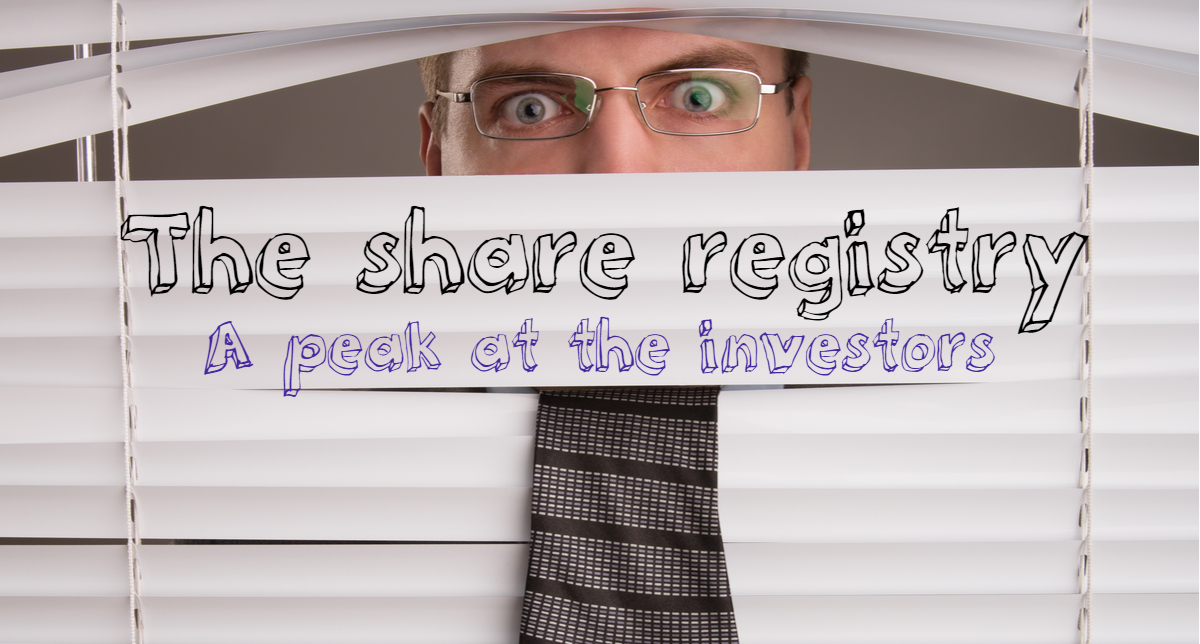 Did you know that as a shareholder, your name is kept on a share register, which can be accessed by the public? This keeps the participants in the markets honest and more transparent, giving the public the opportunity to make more informed decisions when investing.

Simply put, a shareholder register is a list of shareholders maintained by a publicly listed company. The register contains the shareholder’s names, the number of shares they hold, as well as the latest change in their holdings for that company.

For instance, the share registry for Purple Group, which we sourced via Bloomberg, shows just over 1 000 shareholders for PPE – that’s the Purple Group ticker code, not personal protective equipment, although both have seen a surge in popularity of late.

Why would anyone care about the registry?

That’s the thing about publicly traded companies, they are governed by principles of keeping their business relatively more transparent to the public than their private counterparts. A share registry forms an important and underrated pillar in the principle of making information publicly accessible.

From releasing their earnings reports, to publishing the minutes of their annual general meetings, the public company has to make a number of disclosures public.

The number of shareholders there are and who holds shares in the company can help us understand who wields a lot of power in the decision making of a company.

Insights from behind the curtain

The registry can also inform investors on the sentiments of a company’s future by giving us a glimpse from behind its corporate curtains (if they can afford that piece of furniture). If you wanted to see how the people that run a company feel about it, you could look for indications of insider buying, which is different from insider trading.

Barry Dumas, our Head of Research and GT247 contributor, broke it down for me why indicators of insider buying is relevant. "This should give the investor an inside look at how executives and directors feel about the company” – this can highlight that insiders feel that a company is undervalued, which can be perceived as the growing confidence in a business by those within the organisation.

While insider trading happens when corporate insiders (management, executives, board members and associates) transact on a company’s shares based on non-public information, insider buying is ideally based on public info, making it legal while the former is definitely illegal.

Insider buying happens when directors, executives, or management of a listed company collectively purchase more shares within their own company. This doesn't mean that each and every executive or director's investment in a company, or lack thereof, indicates instances of insider buying. Different people have different monetary needs and realities, irrespective of their role in the company.

Take me to the registry!

You can find this information via the company’s secretary, whose details you should be able to find in the company’s latest financial statements. Purple Group’s own secretary is 4 Africa Exchange Registry (Pty) Ltd.

Access to the registry isn't exclusive. Anyone in the public, from media to people who aren't even invested in that company, can view the share registry.

Even though this info is made public, it has been a bit of a contentious issue with high-profile cases relating to principles about the share registry and access to it. Section 26 of the Companies Act provides that "Any member of the public, including the media, may inspect the shareholder register of any company." However, there have been case heard at the High Court centred on this piece of legislation.

Whether you wish to look for indicators of a company's health by checking out its share registry, keeping an eye on what its management and executive teams are up to, or you would like to measure yourself up against other shareholders' holdings, the share registry is just another resource you can use in order to inform your investment decisions.

In other Purple Group news...

Purple Group have released a circular on the conversion of its shares from par value to non-par, as well as the increase in number of shares issued. You can read the SENS announcement here.

Stay tuned for more insights about this latest development and other insights on the markets.

Read:
An Intro to Investing vs Trading