What is Giant Flag? 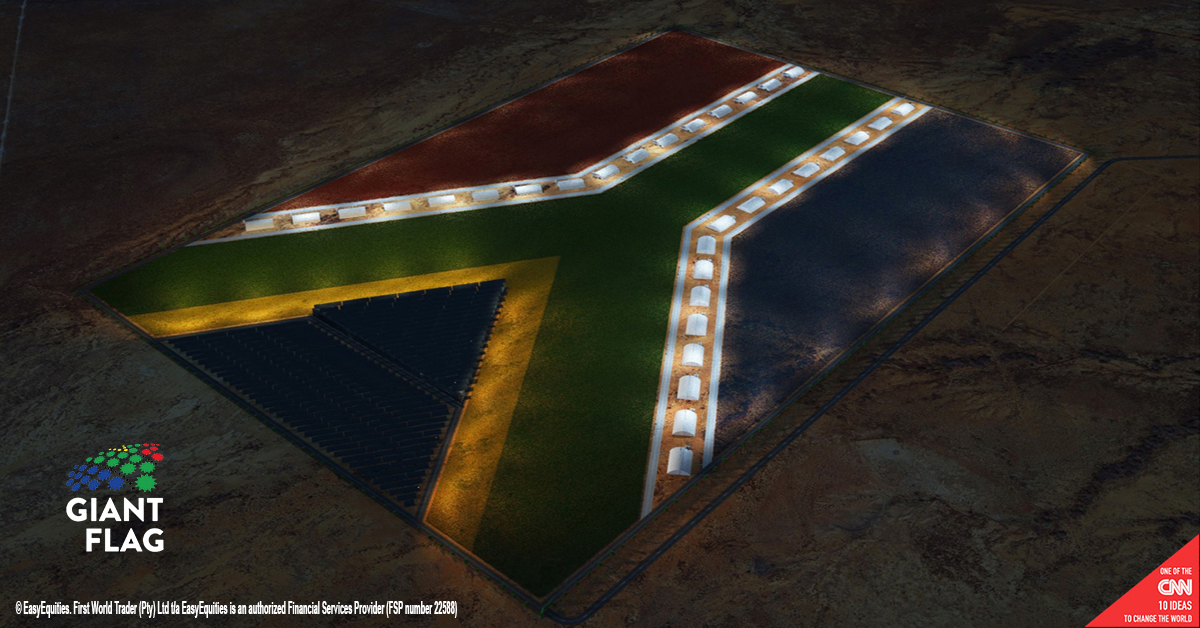 The Americans planted their flag on the moon a few decades ago, of which I'm still not sure whether that means that they own it now. Well we want to be part of something bigger. The folks at Giant Flag are planting their own South African flag, the size of 66 soccer fields, in the Karoo. The world's first "green innovation project that celebrates the spirit of South Africa", will see millions of plants grown in the shape and colours of the South African flag. And it would all be solar powered! You, or what ever is out there, will be able to see our country's flag from space. Take that NASA.

There's another significant element to this nation-building project.

The Giant Flag will act as an "economic stimulus for previously disadvantaged communities" in Graaf-Reinet. The whole initiative acts as a multi-faceted socio-environmental project that champions the country. Everyone within and outside of our borders knows it is not a perfect country, the 'rainbow nation' project is nowhere near what was envisioned two decades ago. But I believe that initiatives like this are one of the many little steps we can take to see it come true.

So what is EasyEquities and our community doing to support the initiative? With the help of our sister company Emperor Asset Management, we have created a bundle called #BackTheFlag, built specifically as a nation-building support channel. The bundle management fees on this product, made up of mostly Satrix ETFs, will be donated to the Giant Flag project. That's a 2.5% fee that we're going to forego and contribute to the project. That means that we're going to need a LOT of help with the initiative.

While Easy has already made a donation to the project, we want to continue to go beyond our budget and include our Easy community in what is one of the most creative environmentally driven, and socioeconomic, initiatives we've seen in a while.

To add a little sugar and masala to this initiative, we will be giving away weekly prizes to our community. From rugby jerseys, to tickets to the Jozi Film Festival, to even proteas and cases of Castle beer, we're going all out Mzansi.

As our community grows in the financial literacy space, and we try to turn the economy around, I think it's time we start to take our environment seriously as well. With an initiative like Giant Flag, we can accomplish multiple goals at the same time. Join us in adding colour to our amazing flag.