One flag, a couple bruises, all reward! 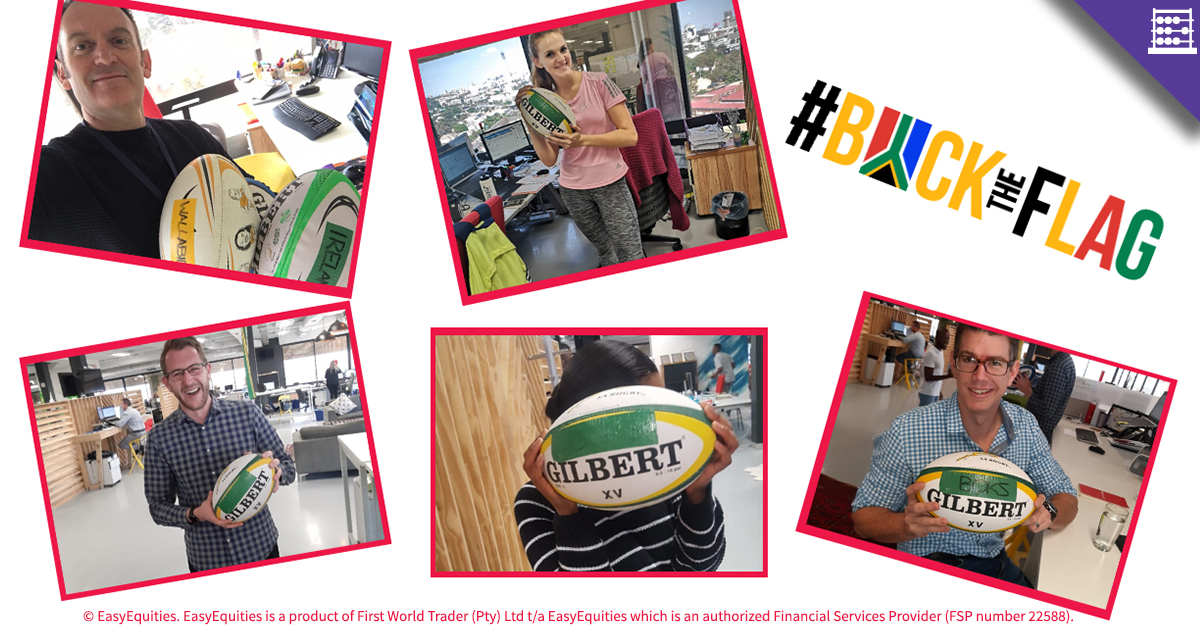 While South Africa has been throwing its support behind the boks in Japan, over at EasyHQ in Braamfontein we have seen real scrimmages take place in the name of #BackTheFlag. No joke. The 17th floor at 25 Owl Street saw physical aggression to rival that of the 2019 Rugby World Cup, all in the name of competition. We introduced our staff to an internal competition involving rugby balls that must be protected during office hours, and a prize to visit the sandy beaches of the East London, in the Eastern Cape. What has happened since has been nothing short of war…

Simply put, the rules were that each department or team within the company would be allocated a rugby ball that they had to protect. That meant that there had to be ten fingers on the ball, or it was fair game to anyone in an opposing department or team. There were no safe spaces. If you found yourself in a boardroom having a seriously serious meeting with some bigwig, and you decided to take a rugby ball with you, what ever happened next was on you.

We saw some of our nerds adapt the rules, with other teams using sheer aggression, while others used a bit of both. *Coughs* Charles *coughs*. In showing guile, planning and teamwork, the office was abuzz in support of the national rugby team and the Giant Flag Project.

I have been tackled to the floor by some tough dudes in our office. From Shaun Keeling, Olympic medalist and ETF-king at EasyEquities, who tackled me in front of our legal and compliance team without any repercussion, to Waylon Smit, Gauteng touch rugby player and under 15 provincial coach, who levelled me out in front of my own teammates. Our developers even got stuck in, with Kamogelo and the Entelect team finding loopholes in the rules to their team's advantage. The passion to win was more than palpable. In fact, it hurt.

And that’s the same type of passion that drives all of us at Purple Group to win and succeed. But that’s another blog for another day.

In the name of an initiative we support, and in celebration of the South African flag and what it represents, team Easy and Purple Group continues to put itself out there. Instead of putting our bodies on the line to bring change, we’re sacrificing profit margins for the bigger picture. A six-coloured, MASSIVE picture made of desert flowers and a four-megawatt solar field.

The point of the whole exercise was to get people in the spirit of South African resilience, and to remember to have fun. The last few weeks have seen our business take big leaps and put ourselves out there to make investing even more simple. Fun fact: many of our own clients wanted to tackle us to the ground! Still, they stuck it out as did we. But unlike sporting activities, we’re all on the same team.

Support the Giant Flag by buying the #BackTheFlag bundle, available in your EasyEquities ZAR account. Help us make a difference in the nation, while you invest and grow your own portfolio.

Any opinions, news, research, analyses, interviews, or other information contained within this blog is provided by an employee of EasyEquities as general market commentary and does not constitute investment advice for the purposes of the Financial Advisory and Intermediary Services Act, 2002. First World Trader (Pty) Ltd t/a EasyEquities (“EasyEquities”) does not warrant the correctness, accuracy, reliability or completeness of any information received from third party data providers. You must rely solely upon your own judgment in all aspects of your investment decisions and all investments are made at your own risk. EasyEquities (including any of their employees) will not accept any liability for any direct or indirect loss or damage, including without limitation, any loss of profit, which may arise directly or indirectly from use of or reliance on the market commentary. The content contained within is subject to change at any time without notice.